My doctoral research began with an investigation into multimedia and site-specific presentations of literary texts.  This investigation was carried out across a series of public projects in which a repertoire of compositional and production strategies were developed.  Example projects are detailed below:

Laganside: A Mobile Poetry Experience in Belfast – a locative media poetry and soundscape app developed for iPhone and Android.   The app activates composed soundscapes and multimedia productions of site-specific poems as users walk along Belfast’s River Lagan.  The app includes poems by writers associated with the Seamus Heaney Centre for Poetry such as Sinead Morrissey, Alan Gillis and Ben Maier.  The app was developed as part of my doctoral research and published with support from Belfast City Council’s Literary Belfast initiative.

Belfast City Choir is a series of events that explore the mediation of literature through movement, vocalisation and interactions amongst audience members.  The scores and build on the site-specific linkages between poetry and place in Laganside.  Many poems are reiterated in varying mediations in order to experiment with compositional methods.

Most of the events are produced as walking tours – participative promenade performances that invite the audience to perform texts (poetry, oral histories) under the guidance of verbal notation. The video above shows one segment of Literary Lunchtime – an indoor event that encourages a variety of spoken and sung interactions between audience members with local poetry and immersive audio playback.

6 November 2013  : On The Move – choral walking tour from Ulster Hall to Open University via Belfast City Hall. Part of OU’s University of the Air Festival. 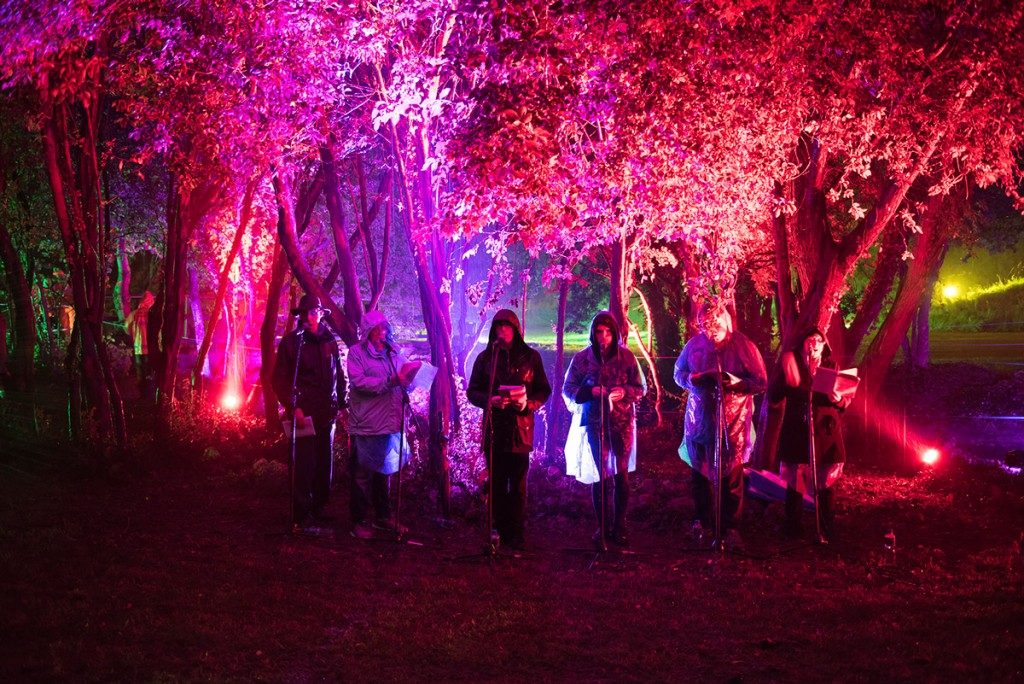 Tolka Chorus invited residents of County Meath and County Dublin to participate in a series of choral workshops at the river Tolka.  Building on the compositional methods devised for Belfast City Choir, the workshops explored a range of musical strategies for listening, composing, performing and improvising. During the workshops based at Mulhuddart Community Centre, participants used their voices to recreate the sounds of the river, its communities and its localities.

Participants were led through a collaborative process to research and curate local history and literature into lyrics for their own musical compositions. Together they developed their own methods of vocal improvisation and verbal notation to produce a group performance based on an imagined journey along the river Tolka.

The above video shows the animated score projected at the time of a live performance by Tolka Chorus. The soundtrack to this film is a montage of performances during workshops and rehearsals.

Additional documentation can be found at the Tolka Nights homepage.

Tolka Chorus was part of Tolka Nights – a large scale public art project commissioned under the Per Cent for Art Scheme relating to the creation of flood defence systems on the River Tolka in catchment areas across Dublin, Fingal, and Meath. This commission was supported by the Office of Public Works (OPW), Dublin City Council, Fingal County Council, Meath County Council, and Create.